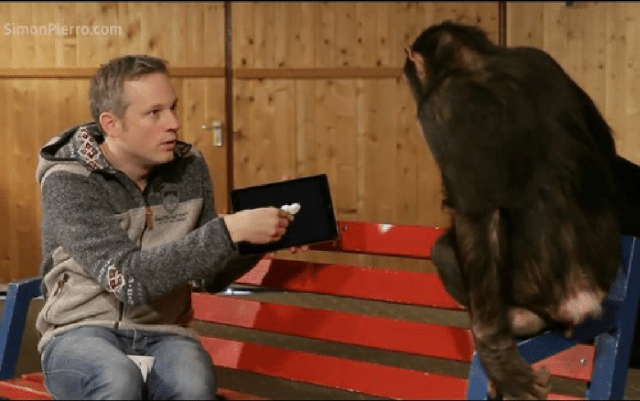 Chimpanzees are fascinating creatures. Our closest relatives on earth are the smartest among the animal kingdom. But are they smart enough to understand magic tricks? One guy seeks to find the answer.

Simon Pierro is a German magician who specializes in using iPad’s to show magic tricks. His YouTube channel is quite famous for his innovative magic tricks that involve iPad. But, showing magic tricks to humans can sometimes become dull. So, Simon decided to take a shot at the chimps and see how they react… and by god, it was hilarious!

Did you know, scientists claim that chimps can sometimes have IQ’s as high as 80 or 90! So, they have the mental capacity to know when something funny is going on. In this case, these chimps were observing Simon closely when he was showing them pictures of peanuts on his iPad screen. But the chimps got the surprise of their lives when the peanuts started to come out of the iPad!

Just when the chimps thought that they could eat those peanuts, the nuts disappeared… leaving the confused chimps scratching their heads! They even tried to use the iPad themselves to get some peanuts on their own… to no avail. But the magic trick was not over yet. Something big and surprising was waiting for them and it will leave a smile in your face when you see how these chimps react when they finally get a sweet treat from the magician. Watch the funny video below…

Watch out for what the chimp does in the end after getting the treat… I couldn’t help but say, “Awww” at his cute gesture.

If you liked the video as much as we did then don’t forget to SHARE it with your friends and family in Facebook. And leave your thoughts in the comments section, will you?

Have a wonderful day!

Rescuers Receive Call About Severely Neglected Dog, They Soon Realize It’s Not A Dog At All