Remember being on those long road trips as a kid and being bored out of your mind? That’s what happened to this Utah teen before she decided video herself lip-syncing to “One More Day” from “Les Miserables”.

Not only did she lip-sync using her iPod but she edited the whole thing and the best part his her parents never realized she was doing it.

“I guess I should be more aware of what’s going on inside the car, but only once I caught a sheepish grin from her while she was holding her iPod,”

Justin Hill her father said. “Her little brother claims he noticed something going on, but they look pretty oblivious in the backgrounds.”

The daughter Elisabeth plays the piano and is in the choir and loves playing musicals, including “Le Mis”, Newsies” and “Wicked” according to her parents but they were surprised that she took the spotlight on this video and came out of her shell.

“She would never do this on stage, but she does like to do music and comedy videos with friends, usually for their eyes only,” Justin said. “Until now, only her family and close friends knew of her talent and flair.”

Elisabeth is a little confused why the video is taking Facebook by storm, her dad said. Predictably, there’s a lot of teenage typical eye rolling involved when her parents share the comments and view counts with the 15-year-old, who doesn’t have a Facebook page of her own.

I showed this to my kids this morning and they can’t stop laughing!  I think it gave them an idea for something to do on our next road trip and perhaps I’ll be able to share that with you in the future.

Let us know what you think of the video below and share with your family and friends if you love it. 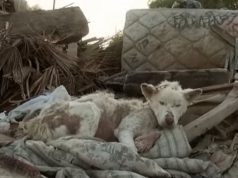